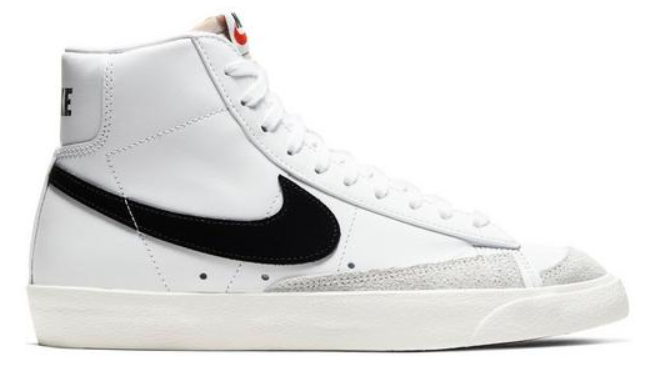 - The Nike Blazer Mid 77 is considered comfortable by numerous buyers.

- The details of this sneaker are clean and sleek, according to a few experts.

- Like many basketball sneakers, this pair holds the ankle sufficiently, many have noticed.

- It has an adaptable design suitable for numerous attires, some reviewers have mentioned.

- The Mid 77 has an affordable price tag.

- Nike's Blazer Mid 77 is narrower, and some critics agree.

- Some testers shared that they found this kicking method stiff and difficult to put on.

The Nike Blazer Mid 77 has a crisp upper with a striking Swoosh brand on the side. Most of the details of its predecessor products are retained-simple and classic. It has a clean appearance and retro details, which can enhance its retro feel. Since Nike Blazer Mid 7’s release, it has been loved by the majority of users, especially the consumer groups who love retro style.

These are great-looking shoes that throw back to a simpler time for Nike before its massive endorsement deals. The shoes look great but run snug and can take a while to break them in making them a little hard to put on right out of the box. The shoes also have a thin sole which is great from the profile but not for your feet. Size up and buy some replacement insoles.
Felipe Lima Alvear

Beautiful slippers, the size is as expected true to size, I love them, maybe I will order them in another color later, they are comfortable, I recommend them.
Camilo Alvarado

Excellent product. I loved it and they were a little tight but they pass. I have to soften them.